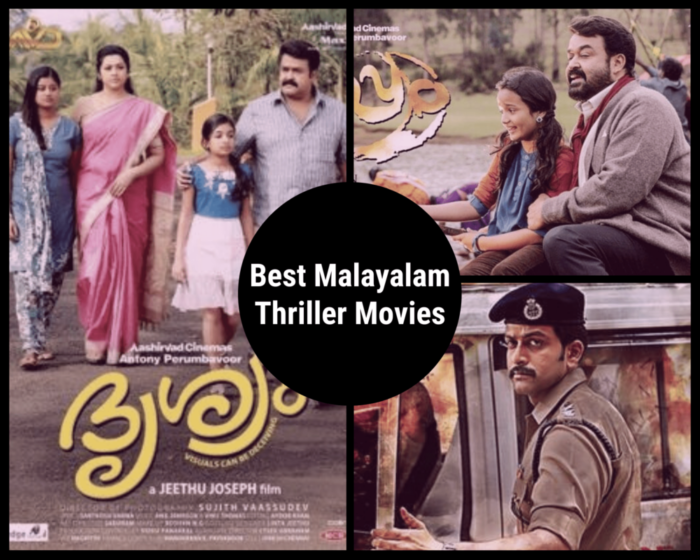 The Malayalam film industry is very underrated among its peers due to the low reach they get. But that doesn’t discourage Malayali filmmakers from creating some amazing movies. This is why we bring to you the list of these super nail-biting Malayalam thriller movies to watch.

For a long time, Mollywood was not reachable to the modern cinema lover but, one thing for sure is that we are witnessing a shift towards good content. This is why, a lot of regional cinema is coming up on the canvas including Malayalam. So, we thought why not find some quality thriller movies of Malayalam industry for you.

Thriller, suspense is one of the most engaging and interesting genre of movies which is loved by everybody. Admit it, a thriller movie has the potential to keep you stick to the seat. Malayalam Thriller movies are no less, in fact, actors like Prithiviraj have made their names out of highly acclaimed thrillers.

So, ready to witness the best pieces of thriller genre? Let’s get started then

So, here is the list of the best thriller movies from Malayalam film industry that you should add to your bucket list if you are a true movie fan!

Ezra is a mix of horror-thriller genres which you will not regret watching. Starring Prithviraj Sukumaran & Priya Anand, this movie takes you through a very neatly scripted horror experience.

The main plot revolves around Priya and Ranjan who buys an antique box and start having some paranormal experiences. Afraid of the dire consequences of the situation, they seek help of a rabbi to know more about the box’s history and learn that it is dybbuk.

A Thiller movie is best served when it is based on a murder plot. This is what 2013’s flick Memories is about. It is one of the classic thriller movies of Malayalam films that needs the much-deserved eyes. The movie stars Prithviraj Sukumaran as Sam Alex, Meghna Raj as Teena, Miya George as Varsha & Suresh Krishna as Vinod Krishna in lead roles.

Memories is a story of a police officer Sam Alex who, after his family dies, becomes an alcoholic to ease the pain. But, his life takes a sharp turn when the city is threatened by a series of murders with a similar pattern and Sam is called up for investigation. Prithviraj has done a fabulous job in the role of Sam to make this Malayalam thriller a classic.

This film is a very engaging tale of murder mystery directed by K. Madhu. The main plot is a mansion that is labeled as aristocratic & haunted, where a string of mysterious murders happen and owners then seek help from CBI officer Sethurama Iyer and his team to find the man behind it all.

This one is really an underrated movie in my opinion in this list of Malayalam Thriller movies that everyone should give a try! The story revolves around Rasheed who comes to India for his daughter’s engagement and gets trapped in a room with a prostitute by his friends. The incident and following actions lead to a bizarre chain of sequences.

Of course, this is a very short description of the movie, but I can’t spoil anything for you, right? The movie, released in 2012, was directed by former theatre actor & playwriter Joy Matthew and consists of Vinay Forrt, Sajitha Madathil, Prem Kumar & More.

C U Soon has the shortest run time among these Malayalam Thriller Movies. The movie’s run time is less than 105 minutes but it is worth every minute of it. Director Mahesh Narayanan has etched a simple story into a breathtaking screenplay that you will enjoy.

The story involves Jimmy Kurien who falls in love with a girl Anumol (Darshana Rajendran) and later find out that her father beats her badly. So, Anumol goes missing one day only to leave Jimmy in dismay. So, he takes help of his cousin Kevin who is a cyber security specialist to find her.

Next up in the list of best Malayalam thriller movies is Jagratha – a 90’s classic murder mystery. The movie’s lead is legend Mammootty along with a support cast of Mukesh, Paravoor Bharathan & more.

So, the story involves murder of a renowned actress Aswathi and everything that follows it. CBI officer Sethurama Iyer (Mammootty) is called up to investigate the high-profile case who then find out a dark secret involving Aswathi which led to her murder and realizes that the case has way more complexities then he imagined.

You should watch it if you like the classic 90’s vintage style murder-mystery.

You often give lift to others right? Well, if you watch Cocktail, you will think before doing so. The acting of the lead stars – Anoop Menan & Fahadh is the biggest reason to watch this movie, and not to forget, the plot of course.

So, Ravi Abraham (Anoop) is living his dream life with a successful career in architecture, a beautiful wife and daughter Ammu. Everything is going well in his life until one day when he gives lift to a stranger named Venketesh and suddenly their lives take a topsy-turvy turn.

What does he do? How do the couple find their way out of the trouble? Watch this excellent thriller flick to know that.

Before we proceed with Malayalam Thriller Movies, I need to ask you one thing – You have a problem, you go to police and they help you out – this is the normal procedure right? But not with this one! This Prithviraj starrer 2014’s – 7th Day is the best example of two types of ex-cops. So, the story involves 2 friends – Shan (Vinay Forrt) & Vinu (Anu Mohan) who accidently run into David (Prithviraj) when he was going back from a party.

They share a very unfortunate event that changed their lives with David who is an ex-cop. And then comes in the twists and turns in the story when David tries to manipulate them as he tries to get them out of the mess! But David doesn’t seem like what he claims to be. Is he? Well, watch this awesome flick to know it.

Drishyam has been the movie that brought the much-awaited fame to this underrated film industry of Malayalam. No doubt you must have seen the movie or its Bollywood adaptation by the same name – Drishyam. This is one of the highly acclaimed Malayalam Thriller movies that is regarded as the flag-bearer of modern Mollywood.

Long story short, the movie revolves around George Kutty who leads a happy life with his wife & daughters until one day when the family commits an accidental crime as the daughter gets filmed indecently using a hidden camera by the son of an IG level police officer.

The rest is the amazing struggle & measures that a common man undertakes & the extent to which he can go to protect his family even when he gets threatened by forces far greater than himself. The legendary Mohanlal has nailed his role as the common man George Kutty and you should surely give it a watch if you haven’t already.

I’ve lost count as how many Prithviraj starrer movies I have listed in these Malayalam Thriller Movies till now, simply because this man is unstoppable! Mumbai Police is one of the best thriller movies that Prithviraj has been a part of.

The story is one huge plus point of the film as it gives you a fresh feeling while watching. So, ACP Antony Moses (Prithvi) is investigating the murder of his friend when he suddenly meets with an accident and suffers from partial memory loss.

How he tracks down the killer and how he manages to tackle the strange events as they unfold when he starts to find the culprit is portrayed in the movie in an amazing manner. This one is quite an experience and you should definitely give it a try!

You should watch the movie for Mohanlal and see, no, experience how he lives his character as he nails the role of a blind man in Oppam! This is one of those thriller movies of Malayalam cinema that you personally feel connected to.

The movie stars Mohanlal as a blind-by-birth man who is loyal to a retired judge he worked for. The judge fears for the life of his daughter from a convict he imprisoned. Later, events unfold as Mohanlal decides to protect the daughter from the culprit.

The movie will keep you hooked for the entire time! This is the beauty of Mohanlal’s acting and direction of Priyadarshan. If you haven’t watched it, you have missed a very astounding piece of art.

Very often it happens that a sequel equals the hype & quality of the first installment. Especially in India where we don’t have much sequels in the first place. But here comes the team of Jeetu Joseph and Mohanlal to thrash all beliefs with this cult-classic thriller Drishyam 2.

The movie follows the aftermath of the incidents of Drishyam and how the lives of the main character George Kutty and his family get tangled up in the institutions as he tries to do everything in his might to save his family.

IMO, The meticulous planning involved in the film is the real hero as you don’t feel that whatever is happening is fictional. Every minute of the movie and scenes that give you a real adrenaline rush is worth it. This is what you want in a thriller movie and this is what Jeetu delivers! A pure masterpiece that deserved to be at No.2 in Best Malayalam Thriller Movies. You can watch it the movie on Amazon Prime video.

Utharam shows how a thriller movie should be made! It shows how character should be built and how the screenplay should roll out to make the movie unforgettable. This is, arguably one of the best Malayalam thriller movies ever made (you may differ, no issues)!

The rich cast of Mammootty, Supama Anand, Sukumaran, Parvathy Jayaram & others make you feel like you’re into the plot yourself. Director V.K. Pavithran has etched every scene of the movie just like a thesis.

Now coming back to the plot, it mainly focuses on Balu, a journalist, who tries to find out the reason why his friend’s wife committed suicide. What he finds out and how it results in the untimely death is worth finding out.

This film has a flawless plot culminating into a one of a kind of climax gives the perfect ending to this magnum opus. Truly, a must-watch for every thriller fan!

Phew, that was a long list of best Malayalam Thriller Movies for you. Just take a pen and note down every movie you haven’t watched till now and watch is ASAP coz they are all classics. And now, you don’t even have to pay anything to watch movies, because we have a whole list of movie download websites.

I know, I may have left some of the movies out, so if you got any suggestions, use the comment section below to let us know which ones we miss & can be added to the list, we’ll be more than happy.

No comments to show.